Papers published in Interface: a journal for and about social movements

A selection of papers presented at the conference have been published in Interface in a special section: “The right to housing in theory and practice: going beyond the West” 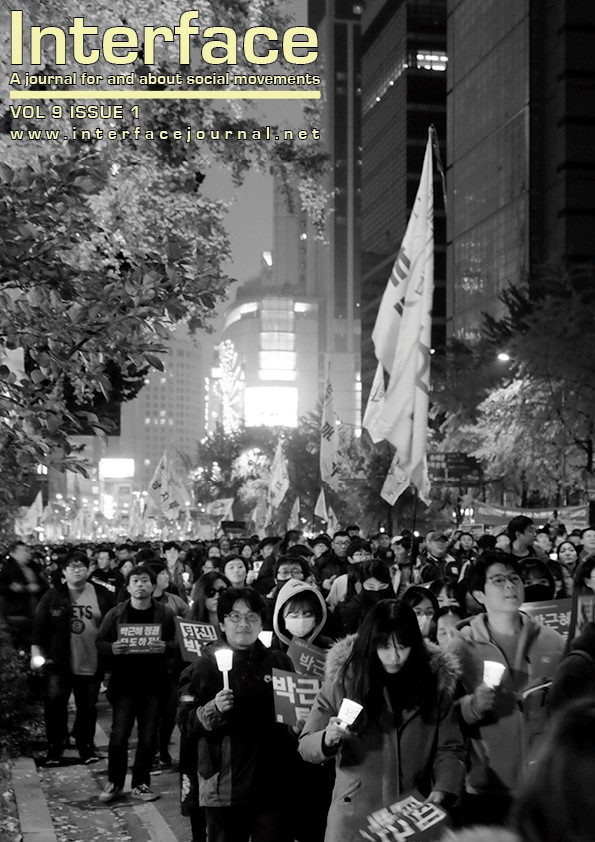 Call for papers to the special issue of Housing Studies: “Housing Activism in a Neoliberal World”

The Journal of Housing Studies is pleased to announce a call for papers on “Housing Activism in a Neoliberal World”:

Privatization of housing, gentrification and displacement of lower income groups, poverty and exclusion in urban space, eradication of affordable housing, and stigmatization of minorities and marginalized groups, are some of the consequences of neoliberal urban policies for the benefit of economic growth. Researchers have shown that the effects of neoliberal urbanism in specific local contexts differ in time, space, degree and impact, and so do their contestations. However, when looking at the research on housing activism one can see that housing struggles have been researched unevenly over the world. The aim of this special issue is to contribute to levelling these differences by focusing on un-explored empirical and theoretical blind spots in the field of housing activism.

We are looking for contributions shedding light on how mobilization on housing issues emerges within specific historical, cultural, political and economic contexts. By focusing on housing mobilization the ambition is to go beyond the fallacy of social science to neglect agency, and in this case collective agency, on behalf of structural explanations. The contributions should focus on grassroots mobilizations contesting market-based solutions and economic reasoning in the field of housing policy. We would like to encourage the authors to address questions on what makes a mobilization “successful” and how “success” in housing struggles should be assessed including its unintended effects. We also welcome contributions dealing with housing activism and the questions of action and inaction, focusing on the ability of activists to deal with failures, threats, constraints, vulnerability and/or economic hardships. We especially welcome contributions recognizing the importance of social structures in housing mobilizations and would in particular encourage contributions exploring under-researched forms of activism in the field of housing, i.e. radical, informal, non-institutionalized or marginalized forms.

We welcome contributions from scholars with different interdisciplinary backgrounds on the following topics:
 Historical perspectives on housing activism, looking at the specificity of the local context, but placing it in comparative perspective
 Under-researched forms of activism in the field of housing, i.e. radical, informal, spontaneous, non-institutionalized and marginalized forms of activism
 Coalition-making and cooperation practices among housing activists, emphasizing facilitators and obstacles in collaborations
 Media in the context of housing activism: materiality, practices and strategies
 Theoretical contributions on the relation between housing activism and neoliberal urbanism

Comparative research with theory-developing ambitions will be given priority. However, we are also open to contributions dealing with specific, single cases of housing activism.

If you plan to submit a paper, please notify the Guest Editors by October 31st, 2016 by sending in a proposal. The deadline for paper submissions is: January 31st, 2017.

Each proposal should include:
 a 500 word abstract with keywords
 a short bio (maximum 300 words) and contact details

Description of the organizations taking part in the activist panel:

The history of the Popular Organization of Independent Left “Francisco Villa” begins in 1988 when several inhabitants of Mexico City got together sharing their urgent need for housing. Housing was and it is still an inaccessible right for the majorities. While the political and economic system in Mexico denies this basic right, it allows the speculation of suitable lands for housing, benefiting directly to the real estate agencies and private capital. As this was also the case in 1988, and considering the high costs of construction, the inefficient programs of social housing and the government’s corruption, we had no choice but to occupy badlands located in the periphery of the city. Here, we had to resist repression and the attempts of eviction; we had to face our fears and beating them, but we could only achieve this through mobilization. Mobilization made us visible, we start existing for those who before negated us and we also start to believe that the impossible was actually possible.

Once in the settlements, alongside with the building of modules with wood and cardboard roofs, we started to build organization, discovering that our everyday struggles were the actions that actually dignified our houses, no matter the construction materials we used. With time we also realized that we were not resolving all the problems with four walls and a roof. Education was a problem too, so we had to think in ways to challenge education as a source for the reproduction of the system. Healthcare also needed to be reconsidered, and trying to break down with the idea of life and death as simple commodities was urgent. During this learning process we also realized that looking after our own spaces and our few belongings was a communal responsibility that had to be built from below, therefore, we decided to forbid the police access to our settlements, creating our own coexistence rules. We ended up creating a culture of solidarity and of mutual support, and our settlements became much more than housing projects. More than housing projects we are building life projects based on new ways to relate to each other.

The Committee of Defence of Tenants Rights (Komitet Obrony Praw Lokatorów) is an association which has been fighting for the rights of tenants in Warsaw since 2009. It has been involved in many protests against rent hikes, unlawful reprivatisation and for the upholding of the citizens' right to housing. It has engaged in daily struggle to prevent evictions of elderly and disabled tenants, including radical means such as physical blockades of evictions and occupations of local government offices, as well as in legal analyses of proposed bills. The Committee managed a successful campaign to block law reforms that would have been detrimental to the tenants, as well as secured the inclusion protective measures in the bill on revitalisation.

During the presentation, we will discuss the specific problems that the tenants movement is facing in Warsaw, the concrete struggles we have been engaged in, our methods and their outcomes and we will assess what changed as a result of this grassroots activity and which methods turned out to be successful and which didn't.


Dikmen Valley, one of the squatter settlements of Ankara, locates at the very center of the city and, thereby; has suffered from threats of local government’s rent-based urban transformation projects. The Valley encountered with first settlement attempts in 1980, which resulted from rural urban migration mobilities of the period. With this movement of migration, families from different rural parts of Turkey settled in the Valley and set up a neighbourhood consisting of inhabitants with various ethnical, cultural, religious and political backgrounds. After the first initiatives of urban transformation projects held by Ankara Metropolitan Municipality in 1994, Dikmen Valley was also exposed to such projects because of the rent potential it harbours due to its location.

Within this context, 2006 was a breaking point for Dikmen Valley since inhabitants established the“Office for the Right to Shelter” to cope with Municipality’s pressures through initiating an organized struggle. The office has played an important and critical role in ten years of struggle and activism of the neighbourhood. After the establishment of the Office, inhabitants of the Valley started to gather there and map out the motives of resistance. The second breaking point in Valley’s history of resistance is 1st of February, 2007. The Municipality organized the greatest attack against the Valley to demolish all squatters. However, this attack reflected reversely and made inhabitants to stick together through performing a more organized resistance.


Throughout the following years of resistance, the struggle for right to shelter has evolved into struggles of different fields like women’s rights, right to free education, right to health service; yet, “right to live” ultimately. As field of struggle has enlarged, the structures that the neighbourhood got in touch have increased; Union of Turkish Engineers and Architects, labour unions, initiatives, NGOs and universities support the resistance and struggle of the Valley community and different events has been organized in neighbourhood with the contribution of these mentioned structures, which all demonstrates the “life” in the neighbourhood by changing means and themes. Therefore, Dikmen Valley becomes a space of resistance and a mentioned case for struggle of both right to shelter and right to live. The motives of resistance and means of struggle in Dikmen Valley varies remarkably comparing with the struggles in other squatter settlements and this provides emergence of different political actors as subjects of the resistance, which also enables public reflection of the resistance.


A Város Mindenkié/ The City is for All


The members of The City is for All are people who are affected by housing poverty (currently or formerly living in homelessness, housed in structures constructed by themselves, living in deprived, unsecure, overcrowded or unhealthy housing, threatened by eviction) and their allies (activists with secure housing), who all work together for housing rights and for an egalitarian and just society.

As we fight against all forms of stigmatization and discrimination, it is very important for us to actively cooperate with other marginalized groups.

The City is for All has two principal working groups.

The Housing working group aims to call the attention of decision-makers and citizens to the consequences of the lack of a housing policy: public housing is scarce, the general condition of the existing housing stock is very poor and it is inaccessible for those who need affordable housing the most. There are many vacant housing units that could be turned into affordable housing – the working group also promotes such usage. The group is committed to codifying the right to housing and to disseminating the “Housing First” approach as an alternative to shelters.

The Interest-ed working group aims to protect the rights and interests of homeless people living in social institutions or on the streets. We work in institutions dealing with homeless people so they can take an active part in making decisions about issues that affect them directly. To this end, we organize trainings for homeless advocates and social workers and we also work on community-building projects in institutions for the homeless. In order to protect the rights of people living in public spaces we published a know-your-rights booklet, which we have distributed to thousands of homeless people. The working group also fights against the unlawful evictions of shack-dwellers.

Other working groups and core activities include:

Homeless Women’s Alliance (HaNEM) is a group exclusively for homeless women. Our goal is to empower homeless women, advocate for their interests and ad-dress their problems. We try to involve as many homeless women as possible, organize trainings for them and call the attention of the general public to their special situation and problems.

The City Is for All Academy provides an opportunity for continuous personal and professional development for our members. Our courses have included community organizing, history of social movement, speech delivery, conflict resolution, filmmaking, and mentoring.

In our Street Lawyer program lawyers volunteer to give homeless people free information and legal advice every week on one of the main squares of Budapest.